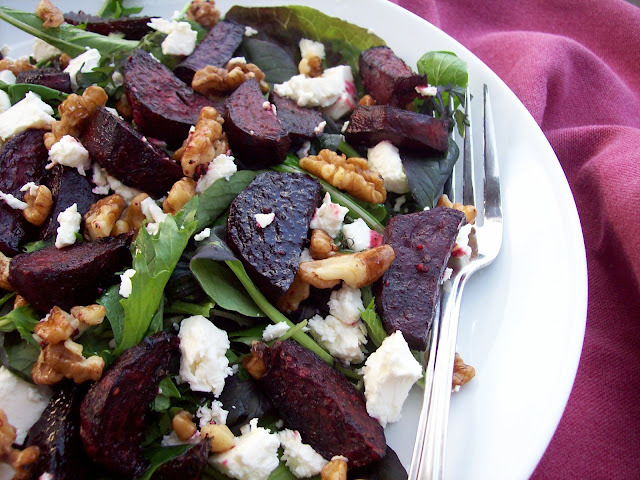 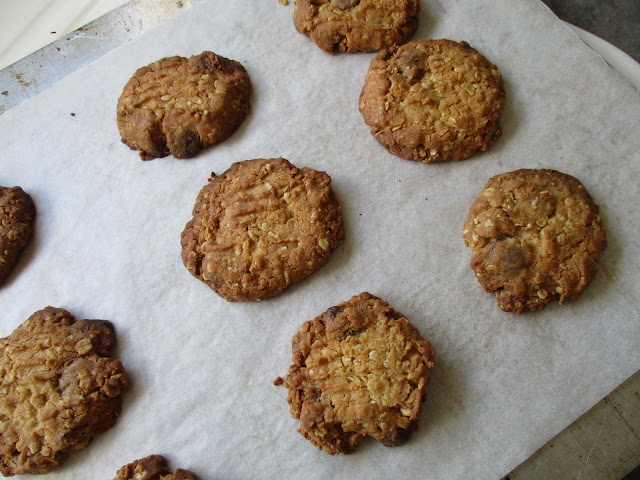 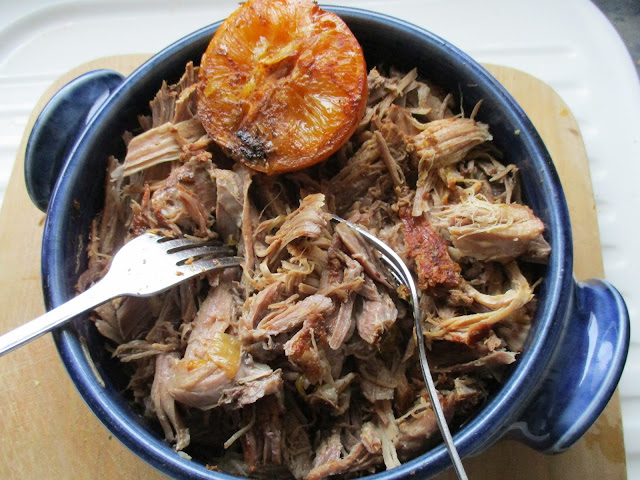 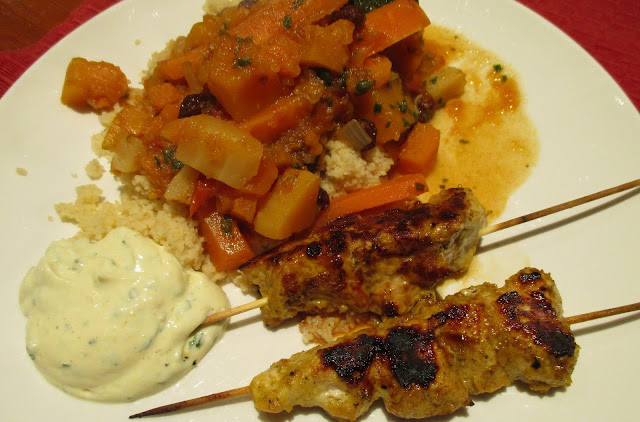 Week One:
Being home alone over the weekend, means that I get to cook meals that cater to my tastes exclusively, this is one of those recipes I have wanted to try for a while now.  Roasted Beet and Rocket Salad from The Free Range Cook by Annabel Langbein.  I have to admit, I am still using her books a lot, but at least I am trying out new recipes.  This salad used freshly pulled beetroot from my garden, it was meant to have almonds, but I only had walnuts in the pantry.  A drizzle of raspberry vinaigrette finished it off.

Verdict: Absolutely delicious, the earthiness of the caramelised beets, combined with creamy salty feta and walnuts, was a beautiful combination,  In fact I liked it so much I had it for lunch the next day too.

Verdict:  Nice and crisp, perfect with a glass of milk or cup of tea.  An easy recipe, so next time I will get Miss B or Mr J to make them

Week 3
I had planned to  use the slow cooker  version for this recipe.  Orange Chipotle Pulled Pork from My Underground Kitchen, unfortunately my shoulder roast was way to big for it, so the oven instructions were used instead. Because of the increased size of my roast, I doubled the quantity of oranges, onions and garlic  but kept the chipotle sauce and water measurement the same.  The house smelt delicious while it was cooking, smoky barbecue infused with citrus,

Verdict: I probably could have doubled the amount of chipotle sauce, but it still tasted good.  Because it was such a large cut of meat, we had a lot of leftovers, so there have been pulled pork sandwiches, pulled pork nachos, and even some frozen away for another meal. Everyone enjoyed it, but we are a little sick of pork now.

Week Four:
I was recently given a jar of preserved lemons, so thought I should find a recipe that used them.  I remembered that hidden on my book shelf was an Australian Women's Weekly Moroccan Cookbook, where I found two recipes to try.
Verdict: Served with couscous and greek yoghurt mixed with some reserved marinade, this was a delicious meal.  The kebabs will definitely feature again on the must make list. The left over tagine was turned into a yummy warming soup with the addition of a can of chick peas and Moroccan flavoured tomatoes.

Now lets see what May will have me trying. 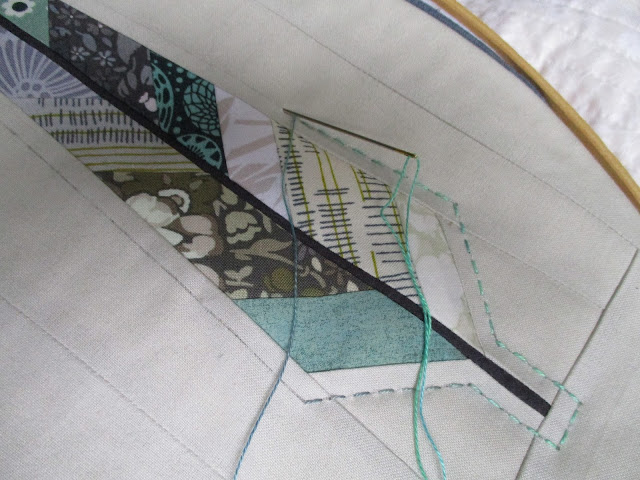 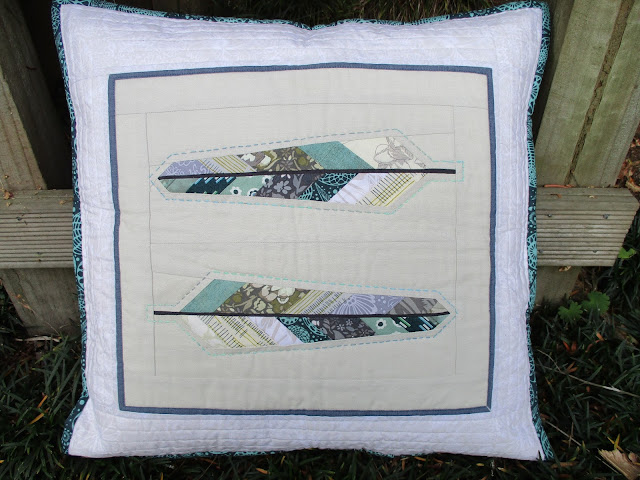 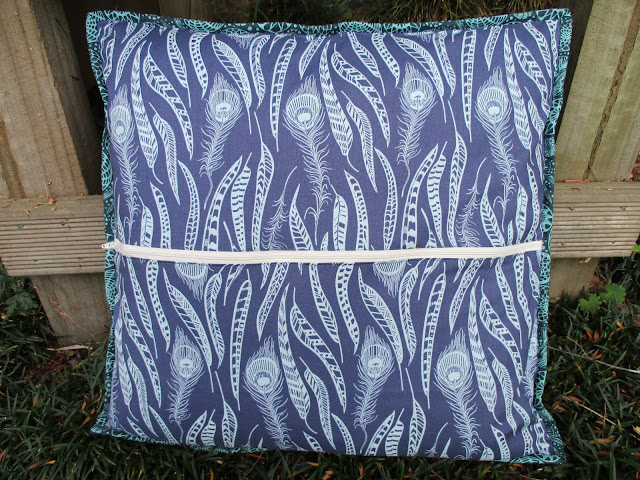 The feather pillow - it is finished ready to be gifted to Miss B.  I wanted to convey the impression of feathers on sand, so I used an oyster shot cotton from Spotlight as the background.  There is a tiny inner border of denim shot cotton  and then the outer border is another AMH Skipping Stones fabric - Palm Fern in Bisque, I loved the soft sandy colourway of this, unfortunately it is not a colour that photographs well, so it is really hard to see the detail of the print.  Straight line quilting on the border and, hand quilting with a variegated thread around the feathers finish the front.  I used  an exposed zip on the backing which is made from another favourite AMH feather print  of which I had just enough fabric for.  Binding from Tula Pink completed this pillow.

That has been enough procraftinating from me, back to working on Mum's quilt now.
at April 26, 2016 10 comments:

The problem with new fabric is that it inspires you to start new projects, and not work on the ones you really need to get finsihed.  eg:  Mum's birthday quilt top.

Miss B has a birthday in a weeks time, she has already received part of her gift - a new duvet set that is no longer little girlish or bright coloured.  She has a love of feathers, so last night while lying in bed, thinking about my new AMH fabrics, I thought they would be perfect as feathers, and of course they will eventually work with her new quilt that I am making

A few strips of fabric later, with some contrasting blues and aquas mixed in, a little cutting and sewing, I have three down sized AMH feathers.  Two are going to be used in a pillow for her birthday, and the third, I'll keep to put in her sampler quilt.  All going well there will be a pillow given to her soon, as long as I remember to measure twice and cut once - currently I am unpicking the border that is too short.

Looking forward to seeing this finished in real life - cos in my mind it looks fabulous. 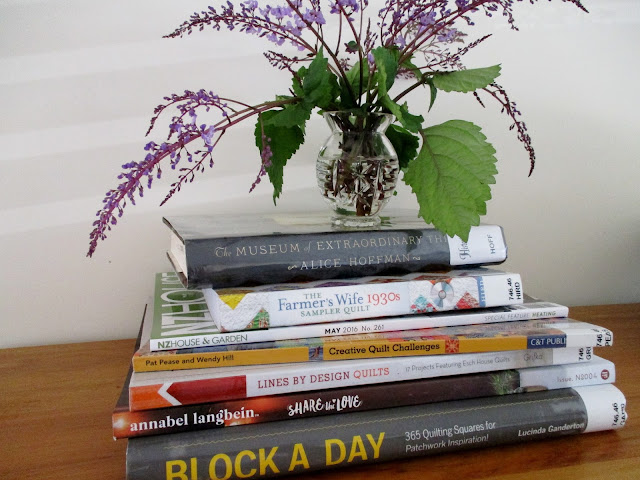 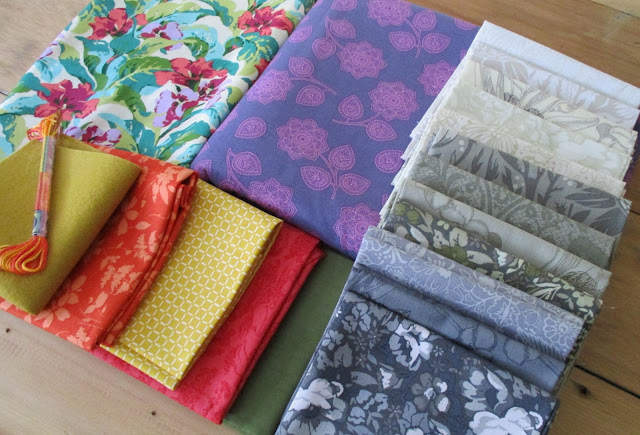 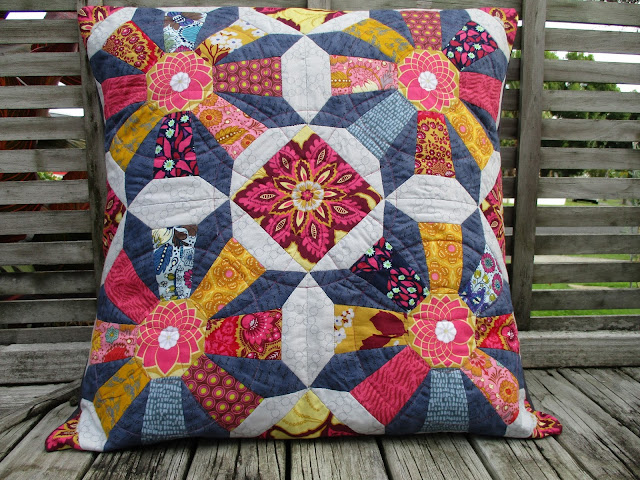 It is School Holidays here at present, Miss B, Mr J and I are enjoying the lazy mornings,especially being able to stay in bed a little longer on these cooler autumn mornings.

Hope you all have a fabulous week ahead. 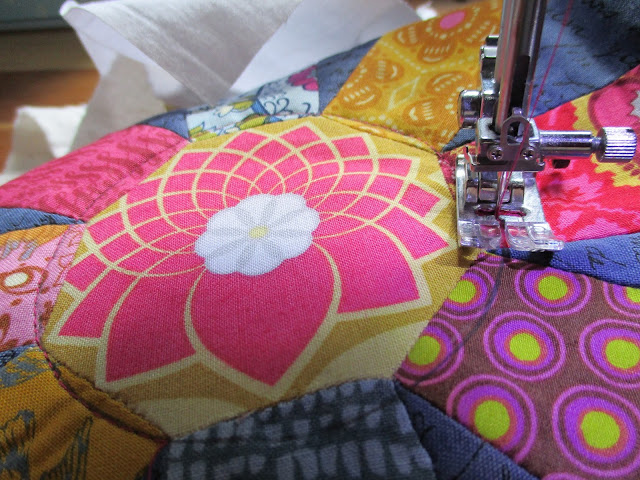 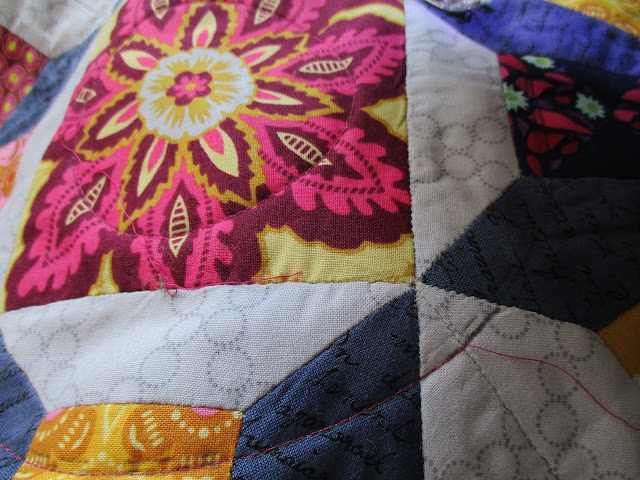 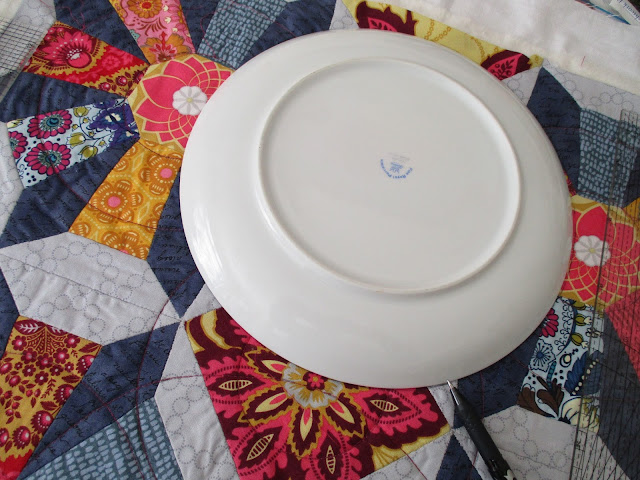 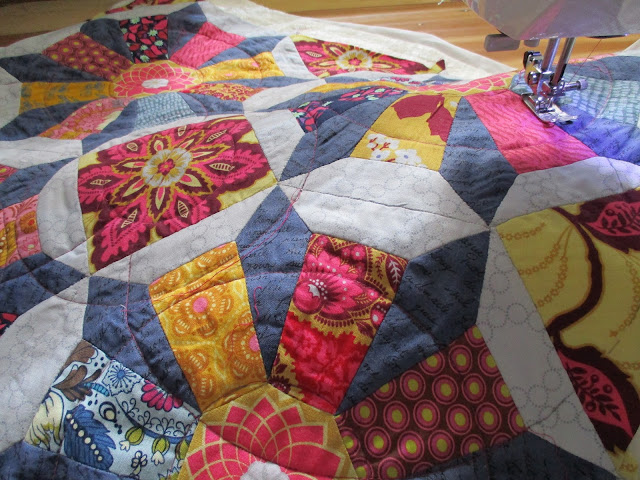 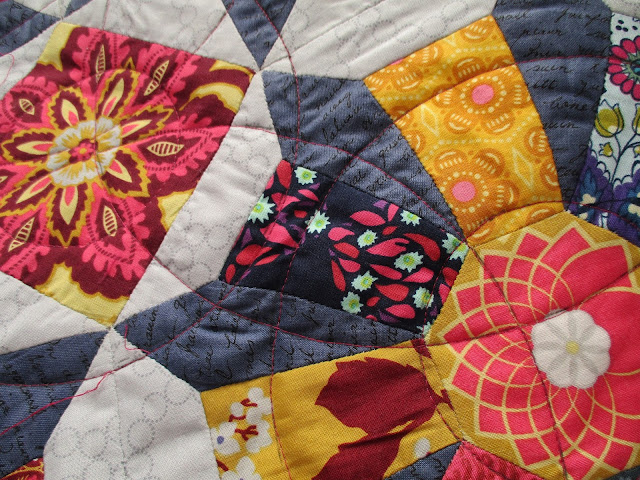 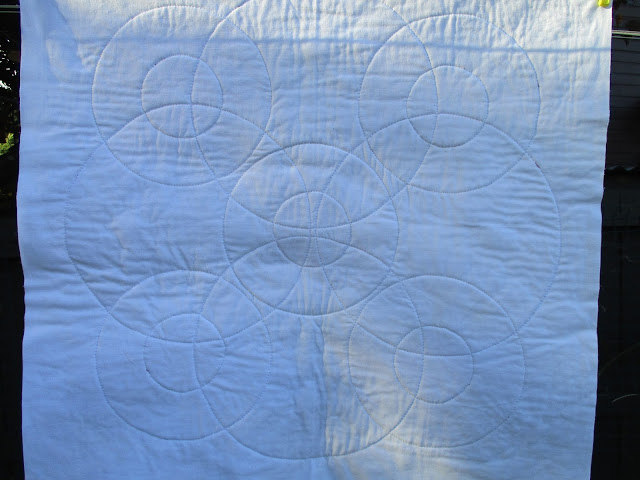 Seeing as I wasn't rostered for work yesterday, and I couldn't really be bothered doing anything to strenuous in the housework department, I decided that I may as well start quilting the cartwheel pillow.

After glue basting, simple circles, traced around readily available templates, (different sized plates and mugs) were quilted with a beautiful fuschia colour Aurifil thread on top, basic white on the bottom. This is the first time I have machine quilted complete circles, I think there will definitely be more circular quilting in my future.  It wasn't until I was looking at all the photos afterwards, that I realised I didn't use my walking foot for this,  thankfully all went well with it.

Now just the pillow back to make and attach, and then it will be ready to be gifted.
at April 15, 2016 7 comments:

Email ThisBlogThis!Share to TwitterShare to FacebookShare to Pinterest
Labels: EPP 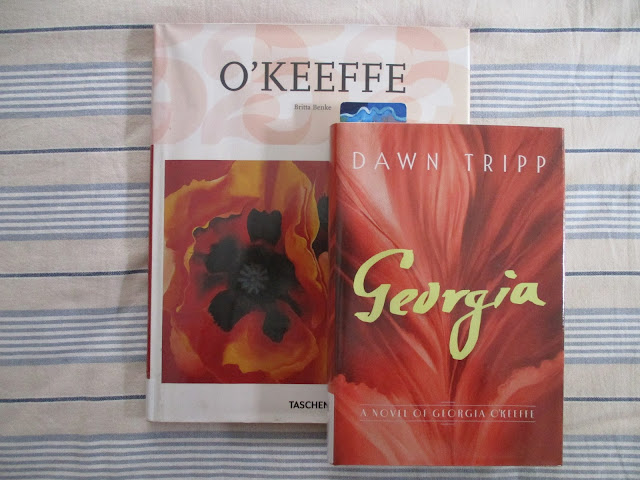 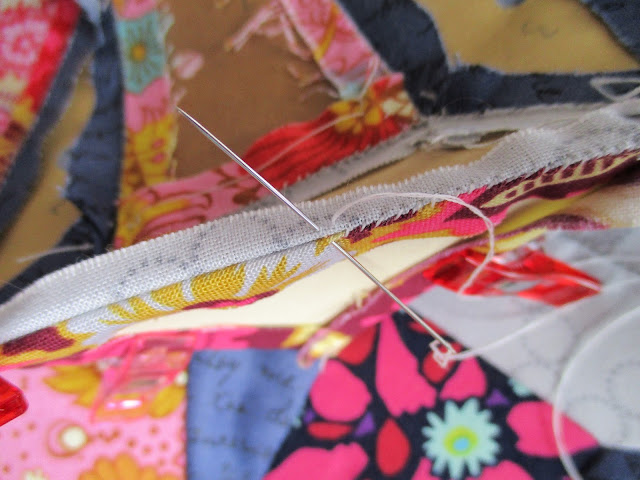 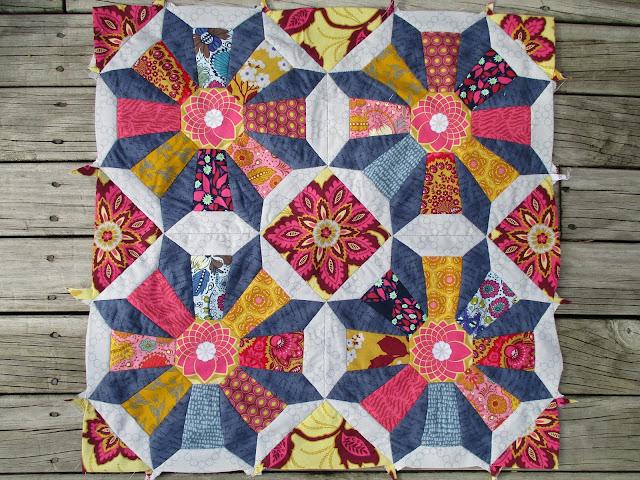 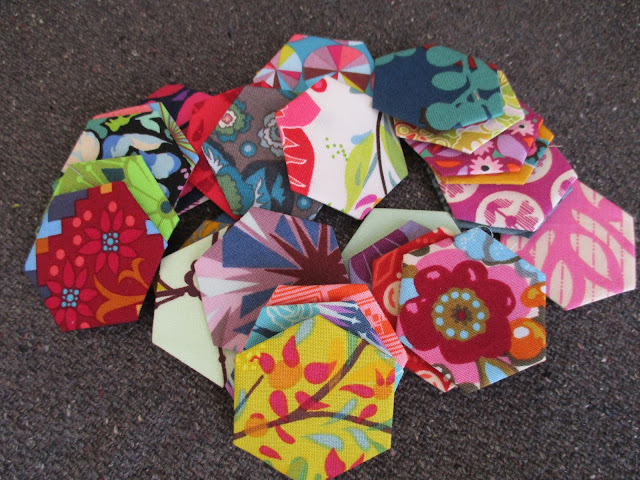 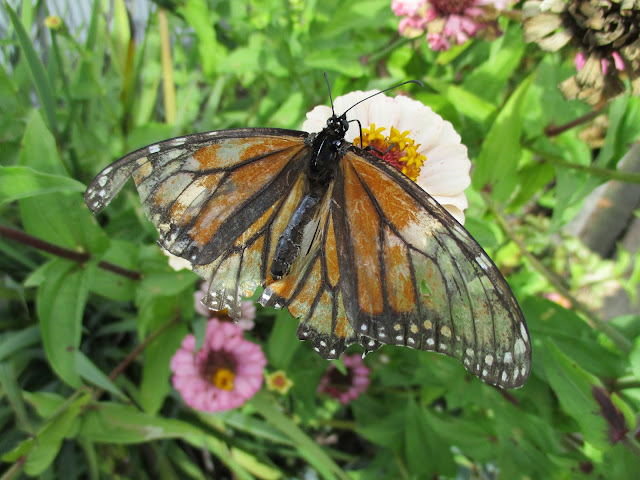 Sewing
Listening
Chasing Butterflies
Wishing you all a fabulous week ahead.

Email ThisBlogThis!Share to TwitterShare to FacebookShare to Pinterest
Labels: EPP, In the Garden, Weekending 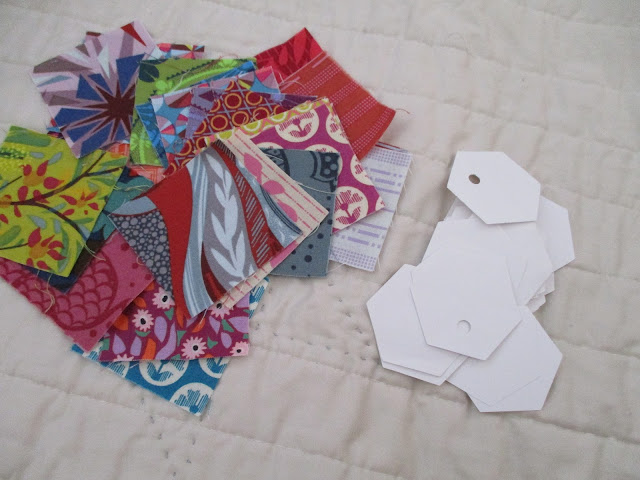 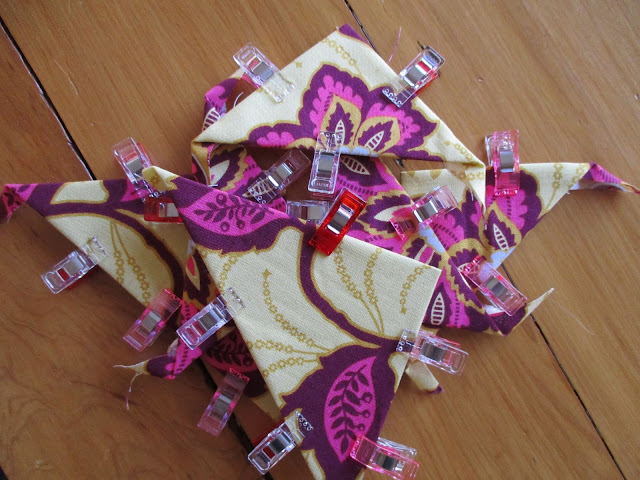 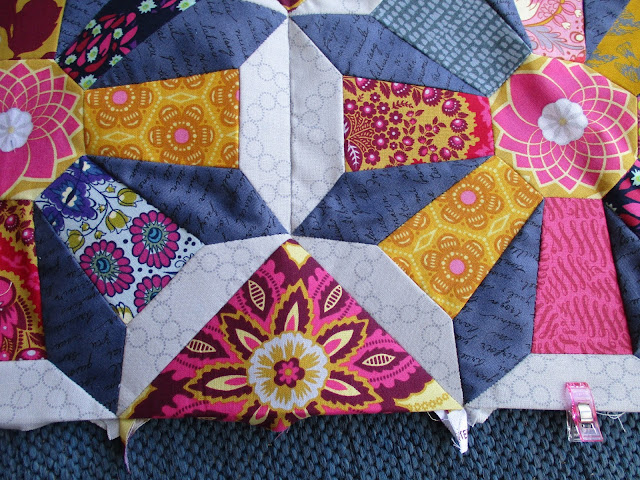 NO, this beautiful pillow is not my work.  However I have been very inspired by this  Tula Pink Hexi pillow made by my friend Susan,  and have decided that my next EPP project will be an Anna Maria Horner Hexi pillow.  The templates have been pulled out, as have the pre-cut 2.5" squares I have on hand.  I see a lot more cutting of these in my future, luckily I have a very healthy AMH stash to support this.

Of course, I need to finish up the EPP Cartwheel pillow first. Last night while watching Outlander, I made the final corner/edging pieces required for this and am now in the process of attaching them.

So nice to know that the end is in sight for the cartwheel and a I have a new winter hand stitching project to look forward too.